My slow life (mis)adventures just won't stop. Natalie Jr. wanted me to go to a mixer with her to help her find a husband (and we did have a wedding, just not the kind you'd expect). Laika participated in a martial arts tournament and we even went to visit Halkara's family! Our beach trip in the south was a nice break, though...

(And Beelzebub is back with more stories from her early days as the minister of agriculture! Who knew demons could be such a headache?!)

I Was a Bottom Tier Bureaucrat for 1,500 Years, and the Demon King Made Me a Minister 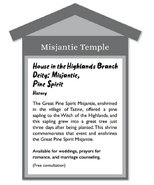